The Sandman Will Keep You Awake - The Loop

Cure for the Common Universe on Amazon

Christian McKay Heidicker’s work has appeared in Spinetinglers, Solarwyrm, and two separate publications called Defenestration, a word that implies throwing something out the window, which Christian hopes doesn’t mean anything about his future. His first book Cure for the Common Universe will be published by Simon & Schuster in the summer of 2016. 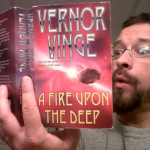